PRESERVING OUR PAST, IMPROVING OUR PRESENT, PROTECTING OUR FUTURE 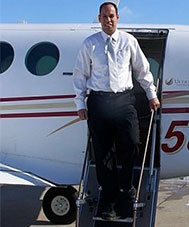 The Portland Municipal Airport dates back to 1933 when land was leased for small north-south and east-west sod strips. These were constructed by the Federal W.P.A. and local labor. The facility was dedicated in 1934 but reverted back to farmland in 1937.

In 1942 the acreage was purchased by Oliver Steed and in 1946 was leased for use as a commercial airport. In 1947 David (Dick) Shreeve became manager of the airport, at the time a 2000 ft. sod strip.

A new 4000 X 75 ft. was dedicated in 1982, parallel to the originally paved runway. Since that time, projects including a taxiway extension, computerized weather station, lighting projects, terminal renovation, hangar construction projects, and other modernizations have taken place.

The Federal Aviation Administration approved the justification to extend the current runway to 5500 feet in 2015 and this project is on-going.